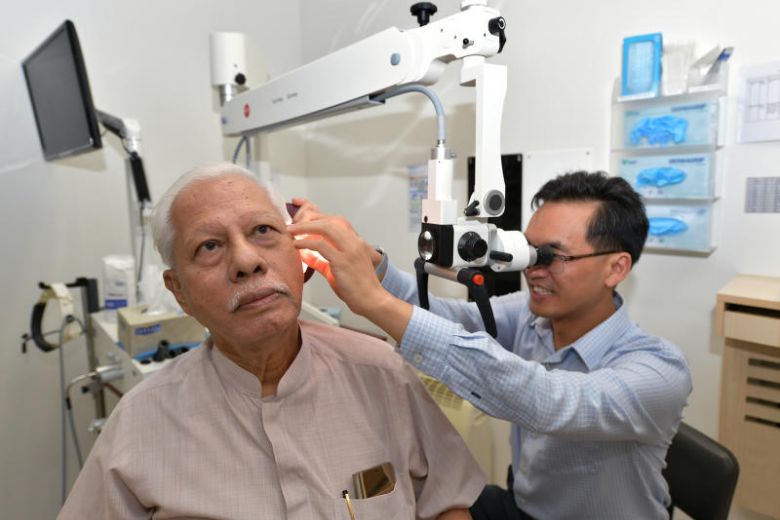 SINGAPORE – Mr Doraisamy Pillay brushed off his wife’s concerns when she noticed that he had difficulty understanding her.

The school counsellor, who was then 67, chose to believe he was merely inattentive, and ignored the advice of an audiologist that he would benefit from a hearing aid.

It was only four years later, in the middle of a counselling session in 2008, that he realised he could not understand what a crying student was saying as he could not hear her.

“It was a terrible shock to me. I couldn’t help her,” said Mr Doraisamy, who was soon afterwards fitted with a hearing aid.

But his reaction is only too common in Singapore, where just 3.3 per cent of people with disabling hearing loss choose to wear a hearing aid, said senior ear nose and throat consultant at Tan Tock Seng Hospital Ho Eu Chin.

Almost 10 per cent of Singaporeans in their 60s suffer from disabling hearing loss, which means they have difficulty hearing conversations in a crowded coffee shop, or during a family dinner when several people are speaking, said Dr Ho on Tuesday (June 18), in an interview with the press to increase public awareness of a preventable health problem.

Studies have shown that  hearing loss is linked to dementia, and is in fact the most important modifiable risk factor for dementia, he said.

The reasons that link hearing loss to dementia are still being studied, but research shows as many as 25 per cent of cases of preventable dementia would benefit from treating hearing loss, he said.

His own study found that of the patients who had hearing aids fitted at the hospital between 2001 and 2013, 69 per cent were already suffering from at least moderately severe hearing loss. This is an issue of concern, he said, as it is harder to treat them.

Dr Ho also cited the National Health Survey of 2010, which found that 73.2 per cent of people with disabling hearing loss did not think they had a problem. He said people should not wait until they perceive the hearing loss themselves to seek help, and should consult a doctor once their family and friends start noticing it.

There are various reasons patients are reluctant to embrace hearing aids, one of which is that they feel it is stigmatising.

Some think that hearing aids are “very noisy”, and they should “wait until they really cannot hear” before getting one. But the issue is more complicated than that, said Dr Ho.

He explained that the complaint about noisy hearing aids has to do with how the brain perceives sound.

Human brains are naturally programmed to tune out background noises, such as traffic, or the hum of the air-conditioning.

However, as one’s hearing deteriorates, the ears no longer detect such sounds. This causes the brain to “forget” how to tune out background noise.

When patients finally get hearing aids, they are once again able to detect the sounds but have lost the ability to filter them out. This leads to the perception that hearing aids are “noisy”.

Dr Ho said this problem gets worse the longer someone who has hearing loss goes without a hearing aid, which is why one should not wait until things get “bad enough” before seeking help.

Patients are also concerned about the price of hearing aids, which cost around $3,000 on average for a pair, according to Dr Ho.

However, there are means-tested government subsidies available under the Senior’s Mobility and Enabling Fund which can greatly defray the cost.

Mr Doraisamy refused to have one because he associated it with illness, and none of his older brothers had hearing problems.

“That’s when I realised – if I wanted to continue working, I’d better get a hearing aid,” he said.

The hearing aid he has in each ear has “completely changed” his life for the better.

He said: “Before, I had a lot of misunderstandings with my wife as she had to raise her voice. My grandchildren would shout at me so I could hear and get scolded for being disrespectful. I didn’t want to meet friends because I was afraid I couldn’t socialise.

“But now I look forward to meeting people, I’m much more self-confident. I got my life back.”

“People think wearing a hearing aid is inconvenient but it’s actually a solution to your problems,” he said.

Dr Ho thinks more patients would come around to wearing hearing aids if they were aware of the link between dementia and hearing loss.

He said about half of his elderly patients who were initially reluctant to get them were happy to do so after learning about the link.

He added that a “massive education effort”, both for patients and doctors, is necessary as the connection between hearing loss and dementia is still not common knowledge.