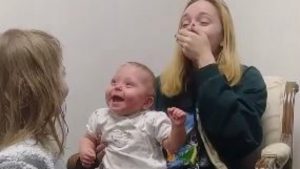 Eleven-month-old Scarlet Benjamin received her first hearing aids last week — and her reaction has melted hearts across the country. Scarlet was born 3 months early and suffered a serious infection early on, her mother, Carol Dianne Benjamin, wrote on Facebook. “She ended up getting NEC … and the antibiotics that she needed cause hearing loss,” Benjamin explained. NEC, or necrotizing enterocolitis, is a common but serious intestinal disease in premature babies. “It has been a LONG and emotional experience,” Scarlet’s mom wrote. “She reacted to most sounds so we thought she could hear fairly well.” The family had no clue how little Scarlet could hear — until she got her first hearing aids. “Hearing aids make a WORLD of difference!” Benjamin wrote. The grateful mom posted a video of Scarlet getting her first set of hearing aids at Atlanta Hearing Associates in Milledgeville, Georgia. After a few seconds with them in, Scarlet’s confused face turns into a huge smile. “Baby sister. Baby sister,” Scarlet’s sister, 4-year-old Halie, says in the video. The sound of Halie’s voice makes Scarlet erupt with laughter. For the first time, she could hear her sister’s voice clearly. Scarlet’s joyous giggle made the whole family start laughing. And the infectious laugh went viral, making people across the country smile. The baby’s giggle also brought tears of joy to her mother’s eyes. “Anyway, enjoy one of the absolute best days of our lives. By the way, I’m crying, you’re crying, everyone is crying,” Benjamin wrote.